The Republican Party of Texas put the following into its 2012 platform:

We oppose the teaching of Higher Order Thinking Skills (HOTS) (values clarification), critical thinking skills and similar programs that are simply a relabeling of Outcome-Based Education (OBE) (mastery learning) which focus on behavior modification and have the purpose of challenging the student’s fixed beliefs and undermining parental authority.

Contacted by TPM on Thursday, Republican Party of Texas (RPT) Communications Director Chris Elam said the “critical thinking skills” language made it into the platform by mistake.

“[The chairman of the Education Subcommittee] indicated that it was an oversight of the committee, that the plank should not have included ‘critical thinking skills’ after ‘values clarification,’” Elam said. “And it was not the intent of the subcommittee to present a plank that would have indicated that the RPT in any way opposed the development of critical thinking skills.”

Elam said the members of the subcommittee “regret” the oversight, but because the mistake was part of the platform approved by the convention, “it cannot be corrected until the next state convention in 2014.” 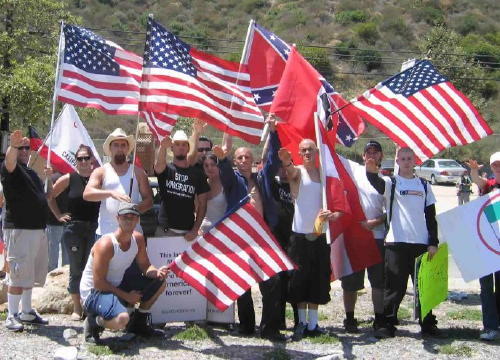 Everyone ought to find themselves disturbed about the Minutemen. They represent the part of the Republican Party which seems to have blatantly embraced fascist tactics. Anytime the government starts authorizing vigiliantes, start getting really afraid.